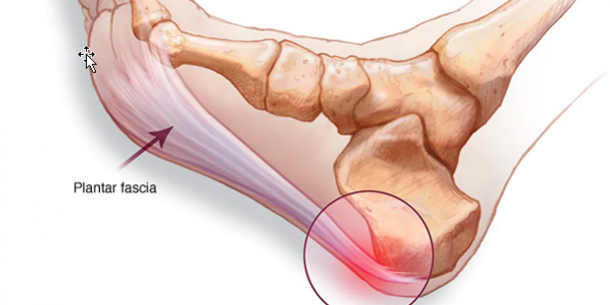 Plantar Fasciitis
Plantar fasciitis is a common condition in the population. Characterised by heel pain, often described as “stabbing” or “like a stone bruise” on getting up in the morning or on taking those first few steps once the individual has been sitting/immobile for any length of time, it can be debilitating. Prolonged standing can also exacerbate symptoms. This makes particular sense when we consider the anatomy of the plantar fascia, which acts as a bowstring which extends from the toe to the heel and supports the arch of the foot. On load-bearing, this bowstring stretches as the foot spreads to attenuate the “shock” of impact. Microtears in the fascia …….Overweight and/or older individuals are especially prone to plantar fasciitis, more so if diabetic… but then so are runners, dancers and anyway who jumps and lands repeatedly, who obviously ask so much more of their feet than the general population. Commonly, the pain is usually worse following rather than during exercise.
Certain adverse foot mechanics can also predispose to plantar fasciitis – flat feet or a particularly high arch, even a contrived gait pattern – can also overload this structure.
Clinically, tension is often palpable throughout the plantar surface of the foot, particularly with extension of the hallux at the MTP joint. Management must include consideration of the tone of the triceps surae, hamstrings and beyond as these will also contribute to this adverse tension with-in the foot. To ignore the symptoms can only risk chronic pain. Almost inevitably, people with these symptoms tend to alter their gait pattern as a means to minimise their pain, which may cause problems further up the chain… in the knees, hips, low back and beyond.
By adminMay 14, 2021